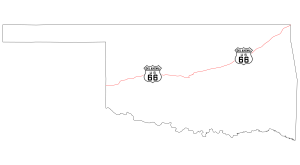 …After the brief trip through Kansas, it’s time to settle in for a lengthy journey through Oklahoma. Oklahoma contains approximately 400 miles of the Mother Road, and thanks to a fabulous preservation effort, it also boasts more of the original routing than any other state. Needless to say, in 400 miles, there is much to see and plenty of history to discover.

Before long you’ll be passing through Miami, Oklahoma. It may not be Miami, Florida, but you surely can check out the historic Coleman Theater. If you had dropped by in 1929, you would have seen both famous stars and athletes of the day. Today, as a result of renovation, you can still see the original pipe organ, known as the “Mighty Wurlitzer.”

Be sure to also stop at Ed Galloway’s Totem Pole Park near Foyil, Oklahoma. This attraction boasts the world’s largest totem pole, which is firmly mounted on the back of a giant turtle.

When you arrive in Claremore, you can visit the museum of one of America’s most beloved national figures: Will Rogers. Rogers achieved initial fame with his dazzling lasso tricks, but he later went on to be a comedian, philosopher, pilot and a movie star. Will also was a compassionate man, raising money for the Salvation Army and Red Cross. He would eventually die in a tragic plane crash, but his legacy lives on through famous sayings such as “I never met a man I didn’t like.”

After Claremore and right before you approach Tulsa, you’ll discover the smiling Blue Whale in Catoosa. 66 tourists used to cool off with a swim next to the friendly mammal. The waters are a little calmer these days, but travelers still enjoy looking at the famous Blue Whale.

Along with many other things, Oklahoma is famous for oil. Undoubtedly, you’ll see oil fields, well or factories throughout your journey. In fact, even before Oklahoma became a state, settlers were flooding to the Indian Territory in search of the precious “black gold.” The state has come a long way from its first oil well in 1859, as today Oklahoma produces 183,000 barrels per day.

Aside from all the attractions, the historical significance of Route 66 in Oklahoma is as important as any other state. During the 1930’s, many Americans were hit hard with the effects of the Great Depression, however, the people of the Great Plains were hit even harder because of the terrible droughts and the resulting Dust Bowl. Many citizens, especially from Oklahoma, fled their life-long homes via Route 66 and sought a better life in California. These travelers became known as “Okies,” and their struggles were captured by John Steinbeck’s description of the Joad family in his novel, The Grapes of Wrath.

There are many more places to visit along Route 66 in Oklahoma. However, it’s now time to move on to Texas…Yee Haw!