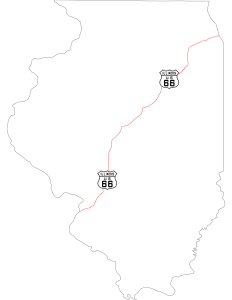 …In Illinois, and specifically in Chicago, the starting point for a westward journey along Historic Route 66. Many people consider St. Louis the beginning of western travel because it was the origin of many of the covered wagon trails of the 1800s. However, with the posting of the Route 66 signs in 1927, Chicago staked its claim to the title of “Gateway to the West.”

In Chicago, you will surely notice the 110 story Willis Tower, one of the tallest buildings in the world and a symbol of the city’s commercialism. Chicago is also the central station for many of the great western railroads. The opening of Route 66, a prelude to the Interstate System, signified the shift of importance from rail transportation to highway shipping.

Before you leave Chicago, be sure to stop for breakfast at Lou Mitchell’s, one of the first attractions along Old 66.

As you are traveling southwest on Route 66, remember that in 1915, this road used to be the Pontiac Trail. Stretching from Chicago to East St. Louis, it was named in honor of a famous Indian chief. Though the Pontiac Trail was converted into Route 66, a town in Illinois between Joliet and Bloomington still bears the name of Chief Pontiac.

Approaching your current location in Towanda, you’ll notice the flat terrain. The level topography is primarily a result of the massive Ice Age glaciers that flattened the area approximately 10,000 years ago. Though the landscape is not teeming with mountains, central Illinois is home to some of the most fertile farming soil in the world. McLean County, the largest county in Illinois, is famous for its production of corn and soybeans.

When you pass through Normal, stop at a Steak n’ Shake for one of its famous steakburgers. The original Steak n’ Shake, founded in 1934, no longer exists, but the slogan still does: “In sight, it must be right!”

After you leave Towanda and pass by Bloomington/Normal, be sure to make a quick stop in Funks Grove. Since 1824, the folks in Funks Grove have been selling some of the best home made maple sirup around.

Just southwest of Funks Grove is the Dixie Trucker’s Home, located in the small town of McLean. In the 1940’s, truckers carrying equipment for the war effort might have paused here for a little break from their voyage to the west coast. Today, the building also contains a museum of Historic Route 66 including the famous Wall of Fame.

If you had passed through Springfield in the 1840’s, you would have been able to witness Abraham Lincoln practicing law in the capital of Illinois. It was here that Lincoln launched his political career and owned his first and only house. Today, along your journey, you can still visit the Lincoln home and tour his old law office.

If you have a little extra time, or if you really like hamburgers, you might stop in Collinsville to see the world’s largest Catsup bottle. If not, keep your eyes on the horizon and watch for the Gateway Arch across the border in St. Louis. This of all the history and geography you’ve experienced in Illinois, and recognize that these are just a few of the many landmarks along Route 66. Then, continue on your journey to the Show Me State, Missouri.