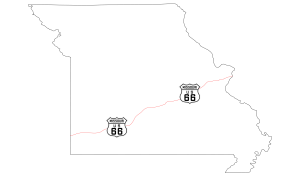 And the journey continues…

…Welcome to Missouri! You’ve made it through Illinois and across the Mighty Mississippi. Surely, you’ll now notice the Gateway Arch of St. Louis. The 630-foot structure was completed on October 28, 1965, establishing St. Louis’ nickname as “Gateway to the West.” Had you been traveling in the mid 1800’s, you would have seen pioneers leaving the city in covered wagons on the many different trails that began in St. Louis. Thankfully, you can climb back in your automobiles, enjoy the air-conditioning and continue on Route 66.

Before you leave St. Louis, make sure to stop at Ted Drewe’s Frozen Custard Stand for a quick refreshment. Although many Route 66ers enjoy either the Terramizzou or the Dutchman Delight, Ted Drewe’s has a wide variety of flavors to offer.

As you are traveling along the Mother Road, keep your eyes peeled for barns that advertise “See Meramec Caverns.” The Meramec Caverns are located outside of Stanton, approximately 50 miles southwest of St. Louis. The caverns extend over 26 miles underground and are seven stories deep. Local Native American tribes used to seek shelter in these caves, which later became a part of the Underground Railroad. Jesse James, the notorious outlaw, also hid in these caverns. Today you can tour the Meramec Caverns and see the colorful mineral formations.

After the caverns, you might pass through Mark Twain National Forest, which is located all throughout southeastern Missouri. Mark Twain grew up in Hannibal, Missouri, and chronicled his boyhood experiences in tales such as The Adventures of Huckleberry Finn. During the Great Depression, around the time of the construction of Route 66, many unemployed men planted trees in the Mark Twain National Forest as part of the Civilian Conservation Corps.

Further on in Missouri, you reach the city of Springfield. Back in 1926, Springfield was the host of a meeting between highway officials of Missouri and Oklahoma, The two states both wanted to construct a new highway, and they sent a letter to Washington D.C. requesting the number 66. Thus, when the highway was commissioned on November 11 of that same year, Springfield, Missouri became the official birthplace of Route 66.

Finally, before you leave Missouri, make sure to make at least a brief stop in Joplin. You can visit the Joplin Museum Complex to leaven about the mining history of the city, or relax at Schifferdecker Park, where many 66 travelers used to stop.

When you are ready to continue, think about your trip through Missouri. From St. Louis to Joplin, the Show Me State had a lot to offer. Then, prepare for the next state: Kansas. The journey will be quick, but it will certainly be just as exciting.