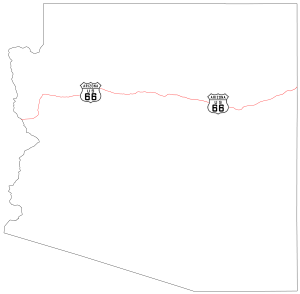 …You’ve come quite a long way on your journey, but now is certainly not the time to race towards the end. Arizona has much to offer in terms of tourist attractions, but its greatest attribute is by far its awe-inspiring scenery. From national parks and barren deserts to the Grand Canyon, it is certain that Arizona, and your trip down this section of the Mother Road, will leave your mind with many amazing memories.

About 50 miles into the state you’ll come to your first natural stop – the Petrified Forest National Park. The theory behind this location is that 200 million years ago, trees that fell into the river would get buried by silt, preventing air from reaching the wood. Consequently, the usual decay process did not occur and the wood crystallized. Eventually, the silt was washed away, leaving behind a rare collection of rock-hard timber.

The Petrified Forest National Park is only one of many sights in Arizona that illustrates the mystery and wonder of Mother Nature.

The first two major towns in east Arizona are Holbrook and Winslow. Although much of the original road has disappeared east of Flagstaff, small sections of Old 66 still exist in these two cities. In Holbrook you can stay at the Wigwam Motel and affirmatively answer their famous question: “Have You Slept in a Wigwam Lately?” Also, don’t miss your chance to be like the Eagles in their song “Take it Easy” and “stand on a corner in Winslow, Arizona.” A bronze statue commemorates this well-known reference.

Located just 22 miles southwest of Winslow is a large hole in the ground that, thanks to the efforts of Eugene Shoemaker, became the first recognized meteor impact crater. The iron fragments, layer of broken rocks, and melted globs of soil were, to Shoemaker, a dead giveaway that this sight was not just a volcano.

If you’re in the mood for more traditional Mother Road attractions, spend some time in the “Capital of Northern Arizona” – Flagstaff. Don’t miss the Museum Club, and Old 66 landmark waterhole, but be careful, it’s rumored to be haunted.

As you’re approaching Peach Springs from the east, make sure to watch out for dinosaurs. A 12-foot Tyrannosaurus Rex looms large on the horizon, but don’t be afraid, its fiberglass, painted body merely marks the entrance to the Grand Canyon Caverns. These caverns not only display the many natural wonders that Arizona has to offer, but they also represent the countless number of fossils and prehistoric bones that have been discovered under the state’s dusty surface.

Yet, no matter how fascinating the caverns are, they can in no way compare to the Grand Canyon, whose majesty simply cannot be captured by any picture or combination of words. Visit this world landmark for yourself – it’s just north of Peach Springs and Old 66.

All throughout Arizona, you’ve been traveling by Native American Reservations. The mistreatment of Native Americans is one of the darker chapters of American history, however, these proud and perserverant people are, in a way, like the Mother Road herself. Though both have been worn down over the years, their cultures and their histories remain as strong as ever.

Enjoy a sunset as you leave Arizona. This simple but emotional image might easily get lost among the hubbub of California.