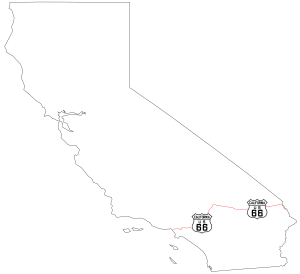 …You’ve come to the final destination in your journey, but for many Route 66 travelers, California was the beginning of a new life. Struggling farmers in the 1930s left their homes and came to California in search of new jobs. So as you cross over the Colorado River into “the Promised Land”, let the water wash you free of your past burdens and fill your heart with the hope of opportunity.

As soon as you enter California, you’ll come to Needles. At first, people could only get to this town by rail, but with the opening of Old Trails Road (later called 66) and the Arch Bridge, travelers could now come by highway. Today, the bridge is shut down, but it’s worth going back to have a look at its history.

Needles is one of the hottest towns in America, with temperatures over 100 degrees for most of the summer. So, check out the fabulous El Garces hotel, but if you need to cool down (or simply stretch your legs), head to the Colorado River for some boating, water skiing, or fishing.

Make sure you have plenty of water before leaving Needles, because next you’ll have a long stretch across the Mojave Desert. Be thankful you’re not traveling across this scorching landscape in a non-air-conditioned Jalopy. Still, if you can bear the heat, there are many things to see. The Mojave Desert boasts over 300 species of animals and many unique plants. If you wish, stay for some camping or hiking, but at least wait around until nightfall for some magnificent stargazing.

After surviving the desert, Route 66 will turn into Main Street in Barstow. Check out the old iron bridge and the railway depot, once the site of the Harvey House.

Next, make sure to plan a brief stop in Victorville and go to the California Route 66 Museum. Enjoy your time in Victorville, as this will be your last breather before the heavy traffic and commotion of metropolitan southern California.

Winding through the San Gabriel Mountains, Route 66 connects a slew of once distinct communities. However, soon you’ll reach Pasadena and eventually Los Angeles. The area has many museums and parks, and of course make time to visit Beverly Hills and Hollywood. The Los Angeles area is modern, but its attractions date back before Route 66 times. Film making, rock and roll, and glamour have long been a part of the city.

Finally, you’ll come to the western end of the road. The city of Santa Monica has done a great job restoring Route 66 and its attractions to commemorate the last stop on this very important road. 66 officially ends at the intersection of Santa Monica Blvd. and Ocean Ave., a location which is marked by the Will Rogers Highway plaque, but take a minute to walk to the road’s unofficial end – the Santa Monica pier – and breathe in the Pacific.

The Golden Gate Bridge, located several hundred miles north in San Francisco Bay, is a symbol not only of the Pacific Ocean but also of the freedom of America. Thought many Route 66 travelers were initially denied the freedom to enter California, the Edwards v. California case in 1941 ensured that people could move freely all across the nation. By affecting the interpretation of the US Constitution, the Mother Road forever cemented its place in history and solidified a fact that all of its enthusiasts know at heart – Route 66 is truly America’s Highway.