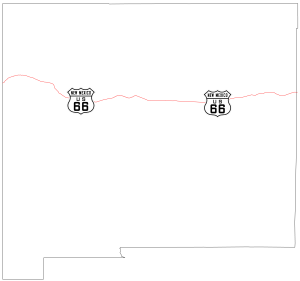 For miles and miles…

…There are approximately 604 miles of original Route 66 in New Mexico, the most in any state by far. Much of the road is now Interstate 40, but still, since the road diverges in the middle of the state, there are many things to see. It may be tempting to try and see everything New Mexico has to offer, but even one quick stop is sure to make the trip well worth your while.

The first town you’ll reach along Old 66 is full of culture and history. Tucumcari, as legend has it, was named for two Indian lovers who died tragic deaths. In the 1950s it was known as “the town of 2000 motel rooms” and urged travelers to stay the night with the slogan “Tucumcari…tonight!” Today, you can still stay at the famous Blue Swallow Motel.

Tucumcari was long famous for its saloons and outlaws, earning it the nickname “Six-Shooters Siding.” Stop by the Monarch Saloon to relive a little of the town’s rowdy history.

Next you’ll arrive in Santa Rosa, a town of Spanish decent that was founded in 1865. Don’t miss the Car Museum, where you can view and even purchase colorful old vehicles.

After Santa Rosa, Route 66 splits into a northern and southern section. The southern section takes you to some smaller towns, but more importantly it travels right through the heart of New Mexico. This region of the state was dominated by Native Americans long before the construction of Old 66. Today, many roadside attractions are dedicated to the rich Native American culture that makes up the backbone of New Mexico. Other attractions, such as teepees and pictures of Native Americans, are actually not native to the New Mexico area, but they are an important part of Route 66 history.

The northern road is the original section of Old 66, built prior to 1937. This route will take you to Sante Fe, where all the buildings, by decree, have to be built in adobe style to honor the city’s history. Make sure to sample a few of Santa Fe’s restaurants, so you can taste a wide variety of cultural foods.

The two sections of the Mother Road reunite in Albuquerque, the largest town on 66 between Oklahoma City and Los Angeles. Even though it is certainly a metropolitan city, many of its buildings are built in a traditional style. Be sure to try the chili at Lindy’s Diner, and catch a show at the old Kimo Theater. Both buildings have been in place since 1929 and are completely renovated.

After Albuquerque you’ll come to Grants, a town named after three Grant brothers who worked as Railroad contractors. In Grants you can visit a national monument and tour the world’s only underground uranium mining museum. Further down the road make sure to stop in Gallup and purchase some of their Native American arts and crafts.

As you’re preparing to leave New Mexico, think back about all that the state has to offer. New Mexico is certainly a modern state but it still retains its rich culture and natural beauty. Take one more look at the wide-open, breathtaking skies as you cross the border into Arizona.